This is.
James Neal.

When it comes to the Neal family, hockey is in their blood. Peter and Deborah Neal – James’ parents – have spent many years in and out of hockey arenas, as all 4 of their boys – James, Michael, Peter and Nicholas – grew up playing hockey. Michael followed in big brother James’ footsteps as he was drafted by the Dallas Stars in the 5th round (149th overall) of the 2007 NHL draft. An 8 year pro himself, Michael finished the 2016-17 season with the Indy Fuel (ECHL). Peter last skated for the Knoxville Ice Bears (SPHL) in the 2014-15 season, while youngest brother Nick split the 2013-14 season between the Whitby Fury and Coburg Cougars (OJHL). James also has a younger sister named Rebecca.

James started his hockey career at a young age with the CYO in Oshawa, Ontario. He then went on to continue his minor hockey career with the Whitby Wildcats of the Ontario Minor Hockey Association’s (OMHA) Eastern AAA League. Following his midget season with the Wildcats, James was picked by the Plymouth Whalers in the 3rd round, 80th overall, of the 2003 Ontario Hockey League (OHL) draft. After a 9 game stint with the Whalers, James was assigned to the Bowmanville Eagles Junior A team in the Ontario Hockey Association (OHA) for the 2003-04 hockey season.

The following year James cracked the Whalers lineup, and he also earned a spot on Team Canada for the World Under-18 Championships, where he won a silver medal. After an impressive rookie season in the OHL – scoring 44 points – James was selected in the 2005 National Hockey League Entry Draft by the Dallas Stars – 2nd round, 33rd overall. That Fall, James was invited to his first NHL training camp but was sent back to Plymouth where he continued to hone his skills. Even though he was returned again to the Whalers following the 2006 Stars training camp, the team was impressed with his development and signed James to a 3-year, entry-level contract. The 2006-07 season proved to be a career year in junior for James, scoring 27 goals and 65 points in 45 games. He was also selected to represent the Western Conference in the 2007 OHL All-Star Game. James continued to be a force in the playoffs too, as he helped the Plymouth Whalers capture their first and only J. Ross Robertson Cup as the OHL Champions. The win earned his team a berth in the 2007 Memorial Cup, where James led all tournament scorers with five goals. Unfortunately, his team lost in the semi-finals. To cap off a great junior career, James was also selected as a 1st Team OHL All-Star.

In 2007–08, James jumped to the American Hockey League (AHL) to play with Dallas’ farm team, the Iowa Stars. He was also once again selected to play for Team Canada, this time at the World Junior Championships in Sweden, where they struck gold. After yet another successful campaign, he earned a crack at the big leagues with the Stars in the 2008-09 season.

On October 10th in Dallas, James made his NHL regular season debut and recorded his 1st career NHL goal in his 1st NHL game against Pascal Leclaire of the Columbus Blue Jackets. December 23, 2008 was another exciting date for James, as he played his first game in his hometown of Toronto. James went on to score a hat trick against his childhood favourite team – the Maple Leafs – to the pleasure of many family and friends in attendance. The league was starting to take notice, and his early rookie season performance led him to be selected to play in the YoungStars game at the NHL All-Star Weekend in Montreal. James finished his first season 11th among the top rookies in scoring with 24 goals and 37 points. And with his 24 goals, he became the new Dallas Stars record holder for goals scored by a rookie.

Following the season, James was selected to make his third appearance in the red and white, as he helped Canada to win silver at the 2009 IIHF World Championship in Switzerland. James’ sophomore season picked up right where his rookie season ended, as he scored the Stars’ first 2 goals of the season against the Nashville Predators. He finished his second NHL season with 55 points, which made him 3rd highest scorer on the 2009-10 Stars. James’ future looked bright in Dallas. For the Stars management, he represented their hopes for the future – a big scoring winger that they needed. So prior to the 2010-11 season, James signed a two-year contract extension with the Stars. But on February 21, 2011, leading up to the trade deadline, James was traded to the Pittsburgh Penguins, along with defenseman Matt Niskanen, for defenseman Alex Goligoski.

The Penguins were in need of a sniper to play the wing along side of Sidney Crosby or Evgeni Malkin, and James fit the bill. They even used hockey analytics to come to the conclusion that he was their man. That season James made his first trip to the Stanley Cup playoffs. He scored his 1st career playoff goal in a thrilling double-overtime win against the Tampa Bay Lightning on April 20, 2011. After an early exit from the playoffs, James suited up again for Team Canada at the 2011 IIHF World Championship in Slovakia, making this his fourth time wearing the maple leaf.

The 2011-12 NHL season proved to be the breakout year for James, playing on Pittsburgh’s top line along with Evgeni Malkin and Chris Kunitz. His superb play was acknowledged with a trip to his first NHL All-Star game in Ottawa, where he recorded an assist in a losing cause for Team Alfredsson. On February 19, 2012 – the day after he scored 30 goals for the first time in his career – James signed a six year contract extension with the Penguins. NBC Sports also featured him on an episode of ‘NHL 36’. James finished up the season with a career high of 40 goals, 41 assists, and 81 points – the 7th highest producer in the 2011-12 NHL campaign. His accolades continued as he was also voted 1st Team NHL All-Star (Right Wing) by representatives of the Professional Hockey Writers’ Association.

Even with a lockout shortened season in 2012-13, James still managed to score 21 goals in 40 games, and added 6 more in the post-season, including his first career playoff hat trick against the Ottawa Senators on May 24, 2013. An injury forced James to miss 15 games early in the 2013-14 season. But upon his return, he picked back up where he left off the previous year. In just 59 games, James recorded 27 goals and 34 assists, for 61 points, scoring at over a point-per-game average in for the 2nd time in his career. On NHL Draft Day 2014 (June 27 2014), while celebrating at a teammate’s wedding, James received the call that he had been traded to the Nashville Predators for Patric Hornqvist and Nick Spaling. 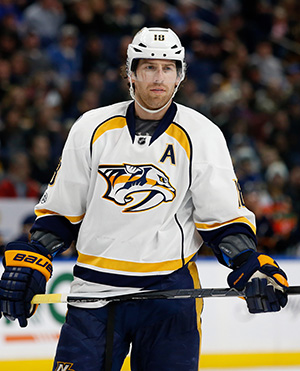 Upon arriving in “Smashville”, James asked for and was given a leadership role with his new team, being named as an alternate captain for the 2014-15 season. While injuries forced him to miss an number of games, James still tied for 2nd on the team with 23 goals, and help push Nashville back into the Stanley Cup playoffs after a 2 year absence. 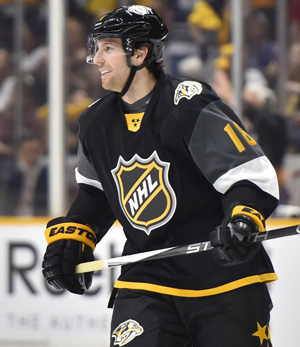 2015-16 turned out be a memorable season for James. On November 23, 2015, he played in his 500th career NHL game, and in January 2016 he was named to his second NHL All-Star Game, which was held in Nashville. As the season ended, James played in a full 82 games season for the first time in his career. He finished with his 2nd highest total in goals (31), and 3rd highest total in points (58). He also set a Predators single-season record and career best plus/minus rating of +27. Once again the Preds made the playoffs, but came up short in game 7 of the 2nd round versus the San Jose Sharks.

Just as 2015-16 was an exciting year for James, 2016-17 continued. After a tough season, the Preds clawled their way back into the playoffs. After a 4 game sweep of the Chicago Blackhawks, the Preds continued to roll past the St. Louis Blues right into the Western Conference finals against the Anaheim Ducks – a first for both James and the Predators organization. After a hard fought series, the Preds – and James – came out on top and punched their ticket to their first ever Stanley Cup finals versus the Pittsburgh Penguins. In the end, the Preds lost the final series 4-2.

Just as quick as the 2017 playoffs wrapped up, the NHL Expansion Draft was here, as the league’s newest team – the Vegas Golden Knights – was preparing to select their squad. Unfortunately for the Predators, they decided not to protect James from the draft, so it came at no surprise when he was selected by the Golden Knights – much to the excitement of hometown crowd on hand.

On Friday, October 6th, 2017, James Neal cemented his name in the Vegas Golden Knights history books. Playing in the team’s first ever NHL game in Dallas, James scored both goals – the first and second in team history – as the Knights won 2-1 over the Stars. The next night in Arizona, James scored the overtime winner to give the Knights their second win of the season.  The T-Mobile Arena played host to an emotional first ever home game of the Vegas Golden Knights on Tuesday, October 10th, 2017. Another 2 goal performance by James gave the Knights their first home win of their NHL career, and created a moment to remember for the “Vegas Strong” crowd.

In January 2018, James was once again selected for the NHL All-Star Game, taking place in Tampa Bay. This was his third All-Star appearance in his career, and along side his teammate Marc-Andre Fleury, they were the first ever NHL All-Stars in Golden Knights history.

After an exciting first season, the Golden Knights earned a spot in the Stanley Cup playoffs. Their strong play continued as they defeated the LA Kings, San Jose Sharks, and Winnipeg Jets in the Western Conference final. This marked the 2nd year in a row that James would appear in the Stanley Cup Finals. Unfortunately their Cinderella season came to an end as they lost the finals in five games to the Washington Capitals.

As the season ended, so did James’ current contract, making him an unrestricted free agent. As the offers came in, James made the decision to move north to Canada, signing a five-year contract with the Calgary Flames on July 2nd, 2018.

On November 25th, 2018, James hit another career milestone when he recorded his 500th Career NHL Point with an assist on Noah Hanifin’s goal versus the Arizona Coyotes.

After a tough first season in Calgary, James and the Flames mutually agreed to part ways, and on July 19, 2019, James was traded north to inter-province rivals, the Edmonton Oilers, in exchange for Milan Lucic and a conditional third-round pick at the 2020 NHL Draft.

In a recent interview with EdmontonOilers.com James said: